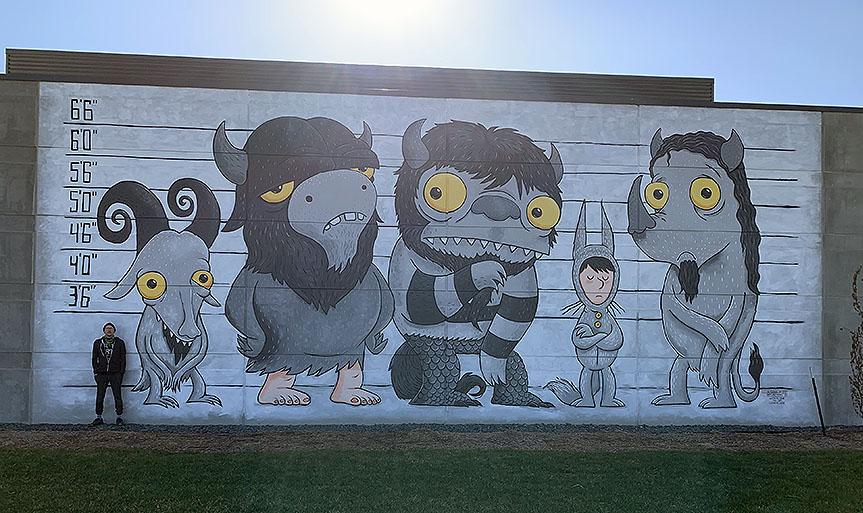 In October of 2020 I had the opportunity to begin work on a large mural on the side of the police station/city hall in Altoona, IA. Being late in the season it was not the best time to paint a mural with freezing temperatures and early “freak snow squalls” (that’s what the local weather channel was calling them). It was turned out to be too much of an adventure for us. We decided to cut the trip short and return when the weather had warmed up. In early April of 2021 we returned and were able to finish the job with only some minor wrestling with Mother Nature.

At over 20′ tall by 50′ wide it was definitely the largest mural I have worked on, as well as my first outdoor one. I loved working on it and eventually was able to tame my nigh-paralyzing fear of heights and become an expert scissor lift operator. Big thanks to the City of Altoona, Mayor O’Connor and everyone else involved in making the project possible. I had a great time working on it with fellow artists: Calvin Hillgrove (my son) and Mike Capp.

The Mural is based on a painting I did in 2012 titled “The Night Max Wore His Wolf Suit”, which is a tribute to my favorite children’s book “Where The Wild Things Are” by Maurice Sendak.

If you would like the see the mural in person, it is located at 900 Venbury, Altoona, Iowa