A kindhearted warrior  trained by an evil brotherhood,

A meddlesome demon  trapped within a steel blade,

A heavenly prince  consumed by a mysterious quest,

And a vase filled with the ashes  of a dead sensei…

All Sinja ever wanted was to become a Sinjitsu Master – the most powerful and terrifyingly evil assassins in the land. But when he discovers that his Sensei is dead, his hopes and dreams are cast into the wind. Until he devised a plan…

With the help of a powerful Oni spirit, a celestial monkey, and a lot of good intentions, he must find a way to gain entrance to the Underworld, hunt down his Sensei’s spirit, and force him to reveal the secrets of Sinjitsu. Only then will he become a true Sinja Master. And only then will he discover the truth of who he really is and who he must become…

Sinja Book Two: Beyond Death’s Door can be ordered here: 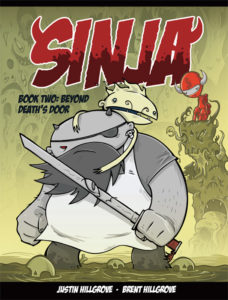 Note: Sinja was discontinued at the request of the alleged trademark holder of the name “Sinja”. So, although two books were published, the series was never completed.