Welcome to Justin Hillgrove’s 2017 “Well Read” Exhibition. This is a new body of work by Justin Hillgrove consisting of over 20 original acrylic paintings and more than 15 framed drawings, all themed around reading and books. Each piece of art is accompanied by a short story, description or poem. “I wanted an exhibition that would allow viewers to stop at each piece and become immersed in the story and details for a time before moving on to the next. A show that was a complete experience…” 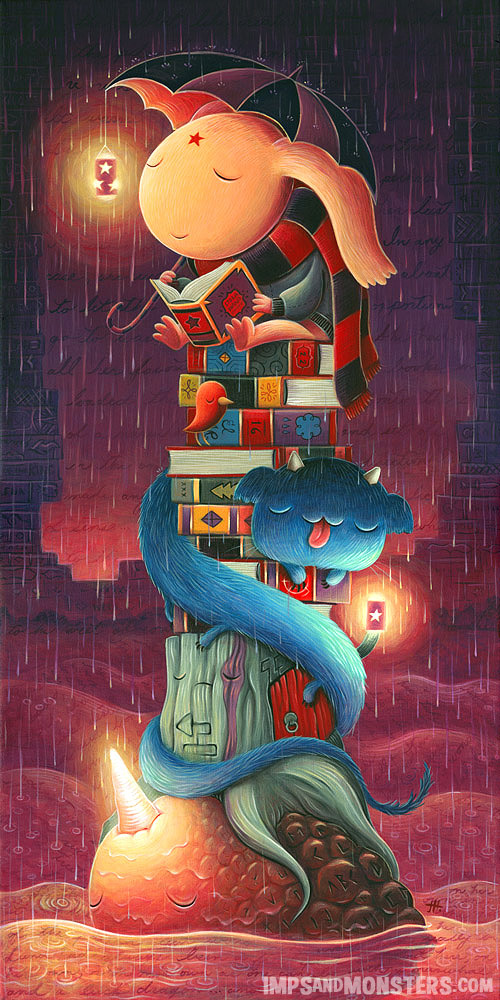 Before the books arrived, the villagers’ time was spent collecting shiny but useless trinkets or staring vacantly at the cacophonous boxes that held such prominent places in their homes. The words on the pages brought knowledge, enchantment and adventure to them in a way they hadn’t dreamed possible before. Many in the village decided to gather their new favorite books and set off in different directions to share their discovery.

Wynne travelled to the West with Hornesby the Narwhalicorn and a curious blue dragon named Emil. Hornesby adores anything nautically-themed so Wynne packed several books to read to him, including the water-resistant editions of “Moby Dick” and “20,000 Leagues Under The Sea.” 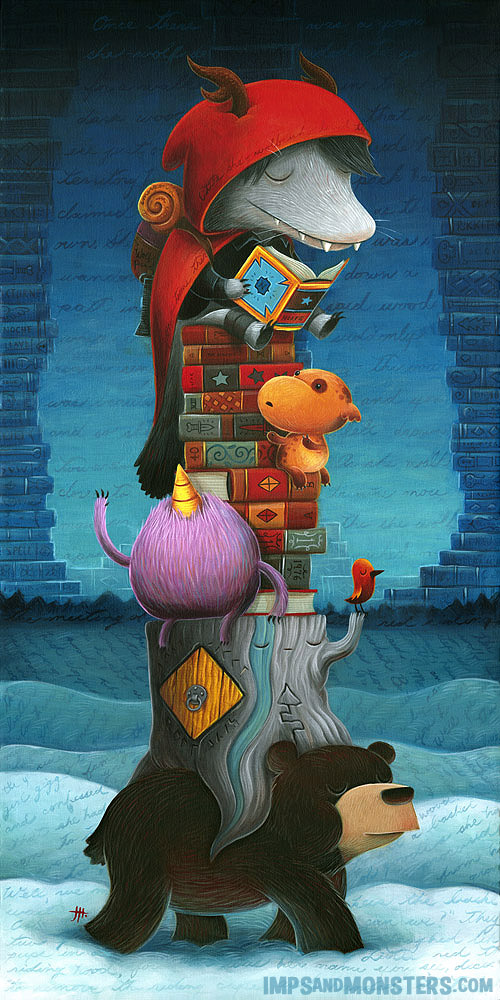 Nicola and Ursel the  bear  packed their stump and headed towards the great lights and open spaces of the wild, wintery North. They both love fairy and folk tale collections, with Nicola’s favorite story being “Little Red Riding Hood” and Ursel’s “Masha and the Bear.” 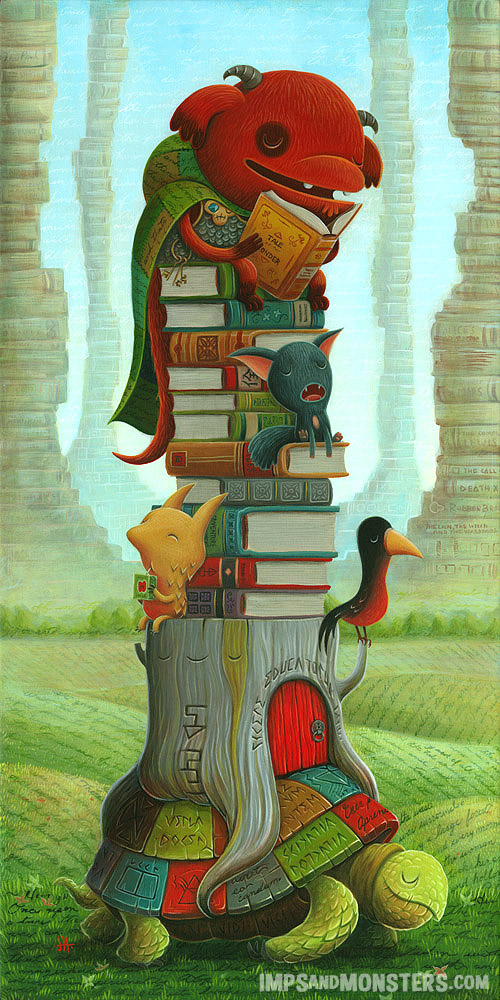 Emyr and his old friend Tudur journeyed to the East with their literary selections and a few friendly stowaways.  They are both enamored with the fantasy and adventure genres, though Tudur will read anything with a tortoise in it. Roald Dahl’s “Esio Trot” is his favorite.

Samu and his amiable companion Baalan were both enthralled by nonfiction. Art and music books,  biographies, histories and even a cookbook were packed for their journey to the South. Samu also included a razor for Baalan just in case it got a little too warm for his woolly companion. 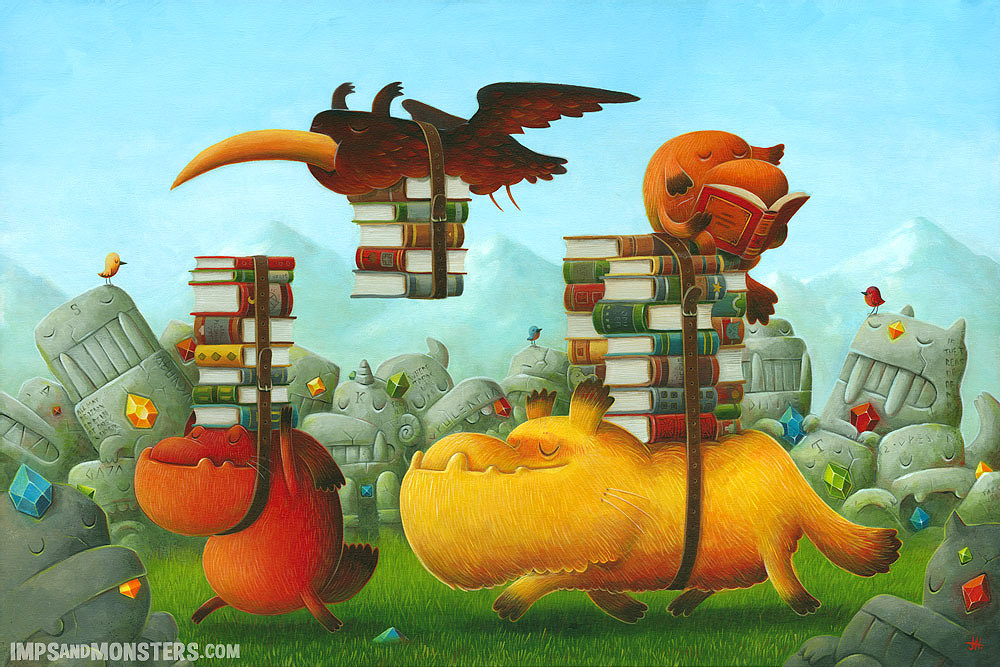 The caravan of refugees loaded up their most prized possessions and set out to transport themselves and their riches. There were many things that shone and sparkled along the way, but nothing so valuable as what they already carried. Focused and determined , but with enough sense to create new stories along the way, they journeyed to a better places. 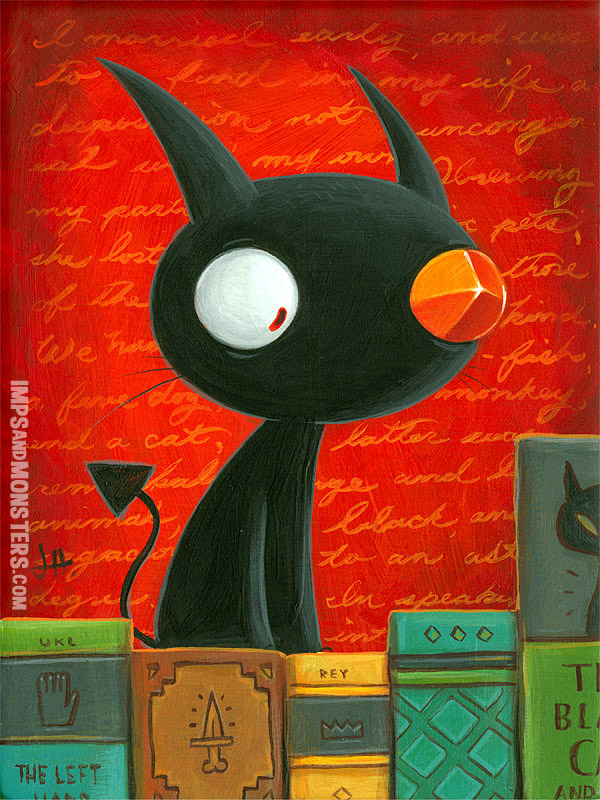 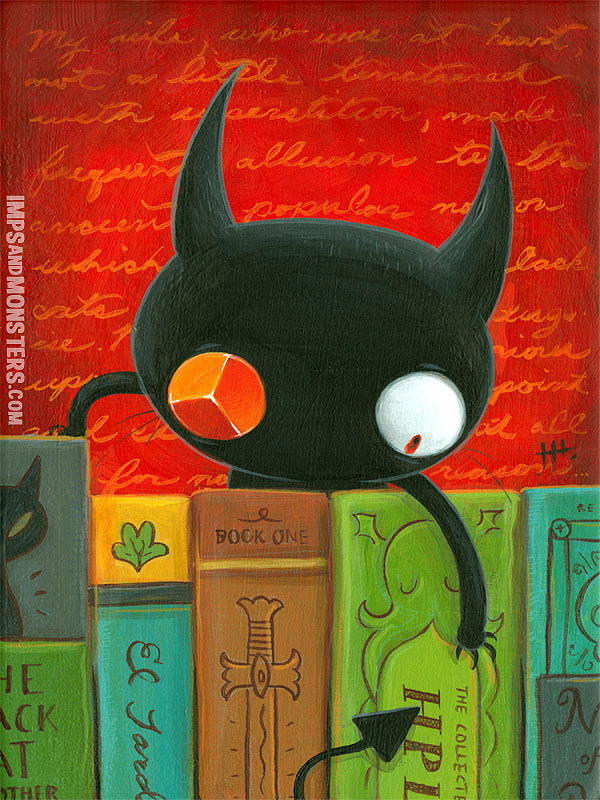 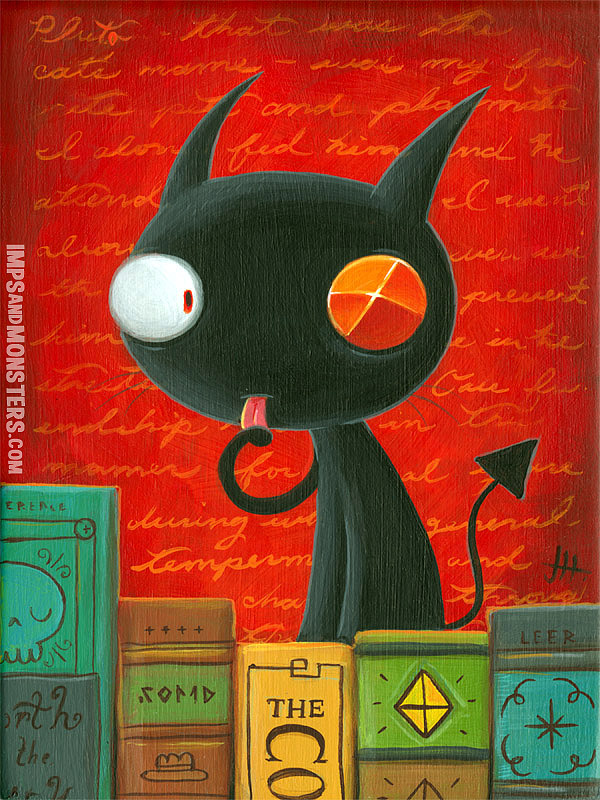 Library Imps are often mistaken for pests or familiars, but they are neither. They are skiddish and wild, but harmless. They are considered good luck in libraries and other book repositories and with good reason. They hunt the rodents, book worms and fairyfolk that often damage books, and their innocent, curious natures are contagious – broadcasted to those in close proximity via pheromones and sub-sonic purring. 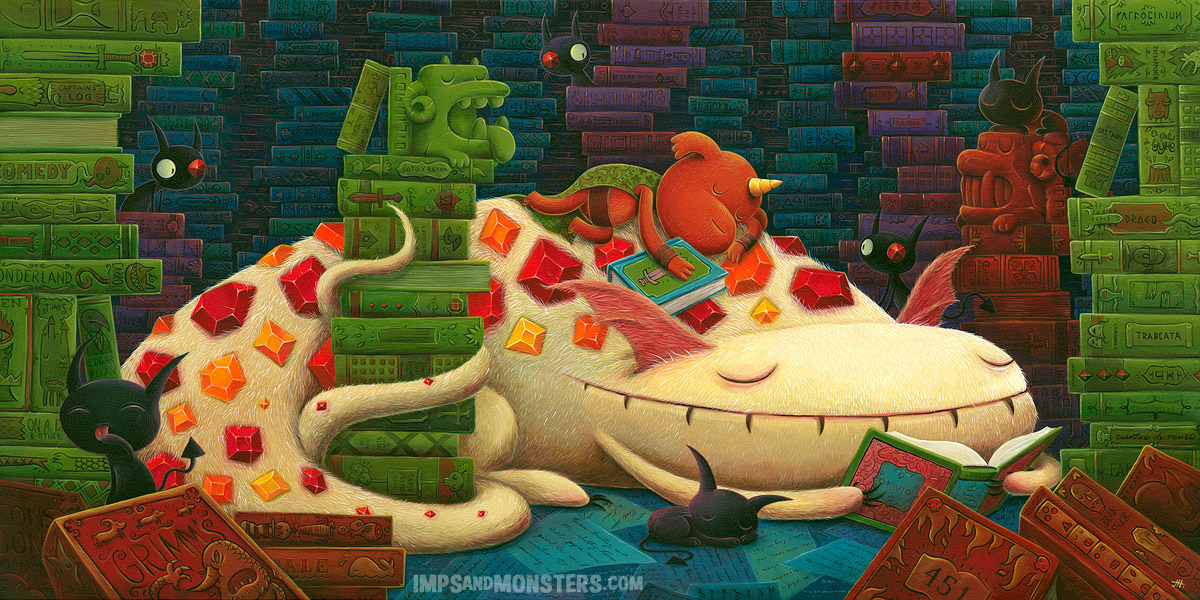 Gilbert McGruff hadn’t realized there was an attic when he had moved into the old house – and it certainly hadn’t been in the brochure. The typical sense of foreboding one usually feels when exploring a hithertofore undiscovered room in one’s home was replaced with a sense of curiosity and then awe as Gilbert’s eyes adjusted to the dim lighting and registered the tall crooked columns as stacks and stacks of books. And the stacks seemed to continue on endlessly in this… attic? No, not an attic then, but a vast cavernous library that had never been disturbed by anyone of the Dewey Decimal persuasion.

Gilbert explored, until he found a volume that looked particularly interesting, and carried it off to find a good reading nook. He noticed a soft glow some way off and followed it, not taking much note of the harmless library imps scurrying around keeping this treasure trove free of pests. To his surprise, (and yet somehow not surprising at all), the glow emanated from a large, furry dragon with gem encrusted hide and a lazy smile.

It looked up from its book and said “Oh yes, good choice. I do so like that book. Why don’t you climb on up and settle in for a spell. Nothing quite like a good book.” They read until Gilbert’s eyes drooped and the book slipped from his fingers. 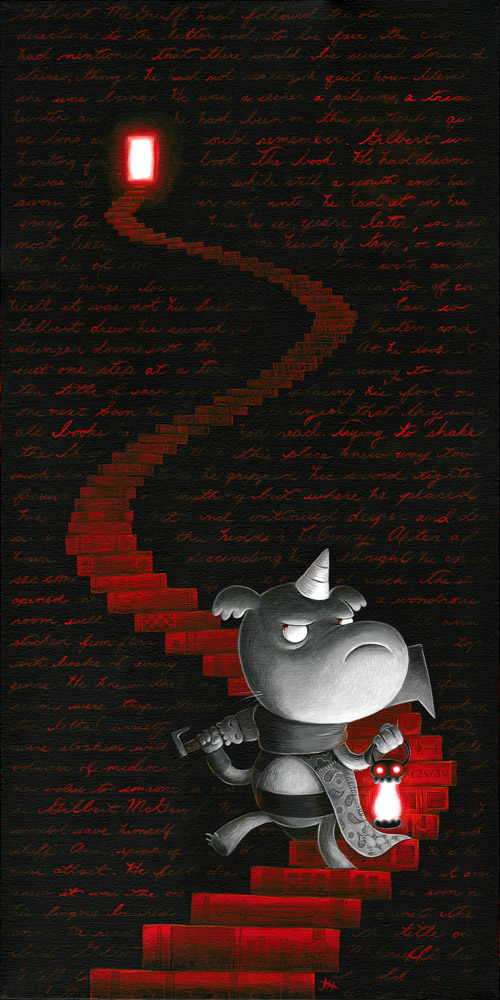 Gilbert McGruff had been on this particular hunt for most of his life. He was seeking a book, the PERFECT book. He’d followed the old, wise woman’s directions to the letter and had found the entrance right where she said it would be. And now here were the stairs. She had said the stairs went on for many stories but he hadn’t realized just how literal her words would prove to be.

At first he descended slowly, reading the titles adorning each “step”, but Gilbert soon realized that every one was a book he had already read. Unsettled because this place seemed to know too much about him, he fixed his eyes forward and continued his descent, trying to ignore the sounds of shuffling  papers and sliding books echoing in the darkness around him. 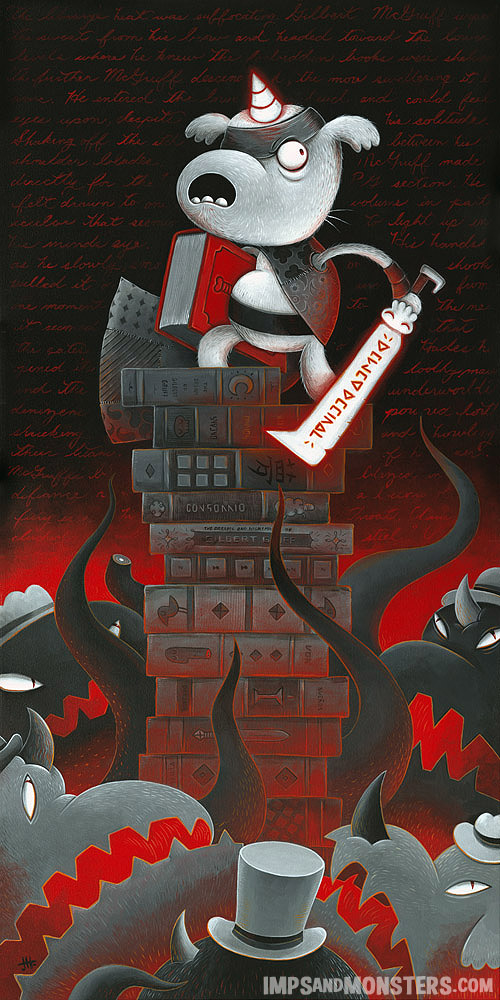 Gilbert McGruff clutched the book tightly and took stock of his situation. He was still shaking from the flight from the lower levels and the fight that had cost him his lantern and his right eye. And they all said getting TO the book would be the hard part – well, he’d have quite the story to tell when, or if, he made it back. His ancient blade suddenly blazed with hot, white light – a sure sign that they were closing fast. Unfortunately, the glow also illuminated the wrong turn he had taken. Now the only way out would be to wade through the mass of claws, teeth and tails. Gilbert took a moment to steady his nerves and turned to face the hosts that haunted these primeval passages. “This had better be a REALLY good book.” 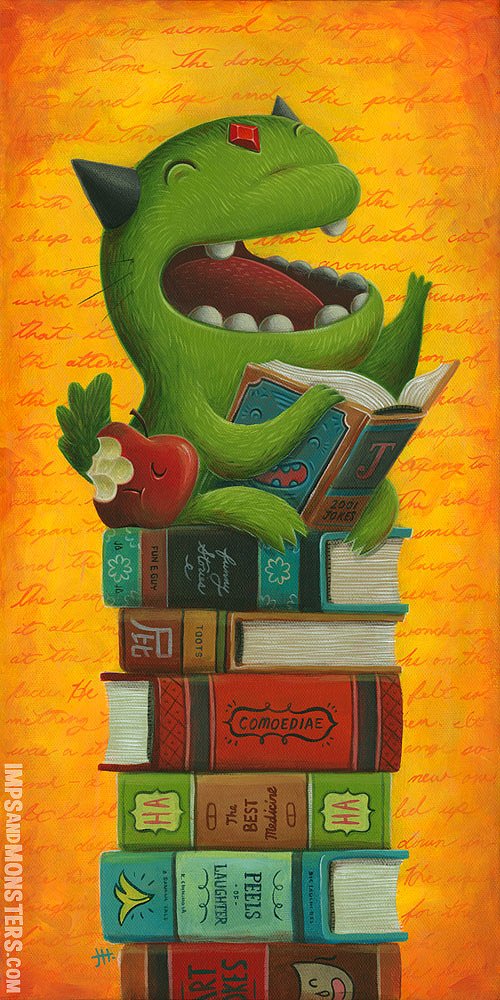 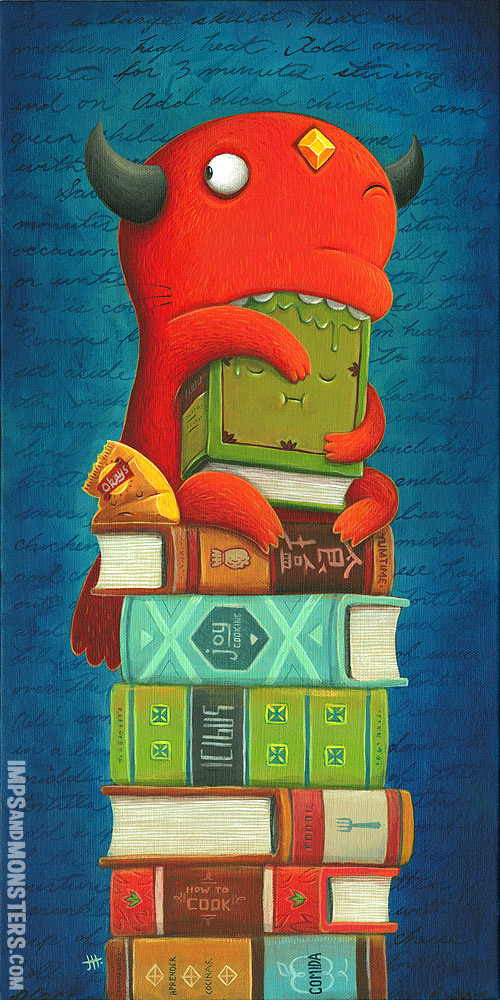 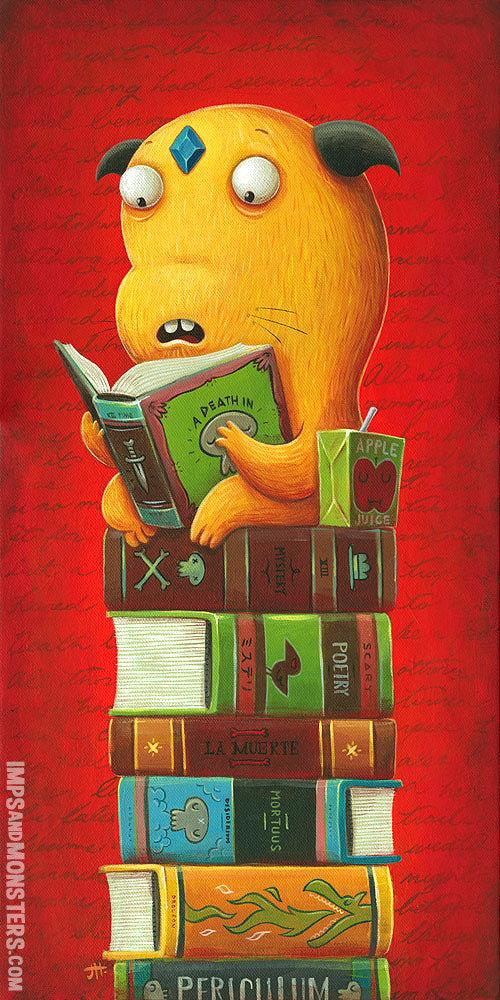 Book Imps gravitate towards a specific genre of book, and will devour every word of their chosen genre, pausing only to prank unwary librarians, and to pilfer snacks from vending machines and unguarded school lunchboxes. They take everything they read literally and believe all books to be non-fiction. As a result, Book Imps that lean towards the horror genre are afflicted with all kinds of anxiety and emotional trauma, and those of the romance and mystery pursuations are insufferably meddlesome. Despite their voracious appetites for the written word, Book Imps refuse to read eBooks, nor do they believe anything they see on the internet. 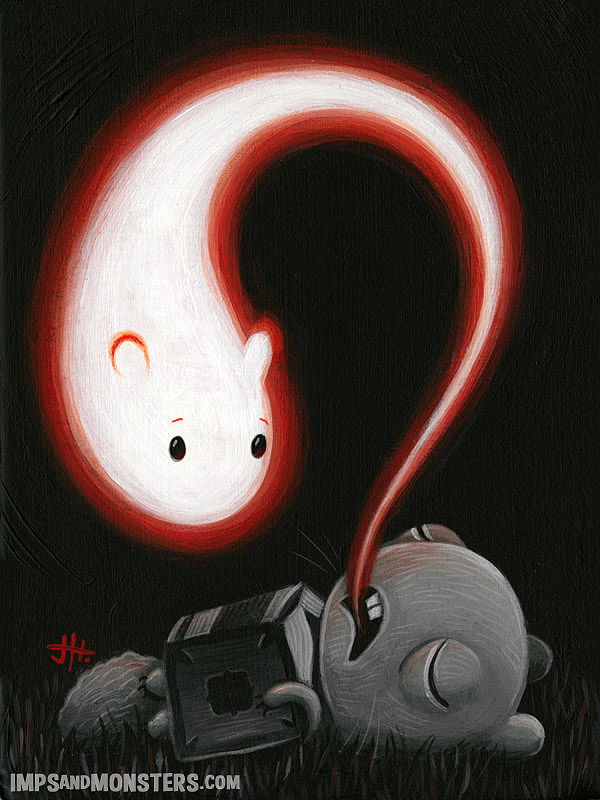 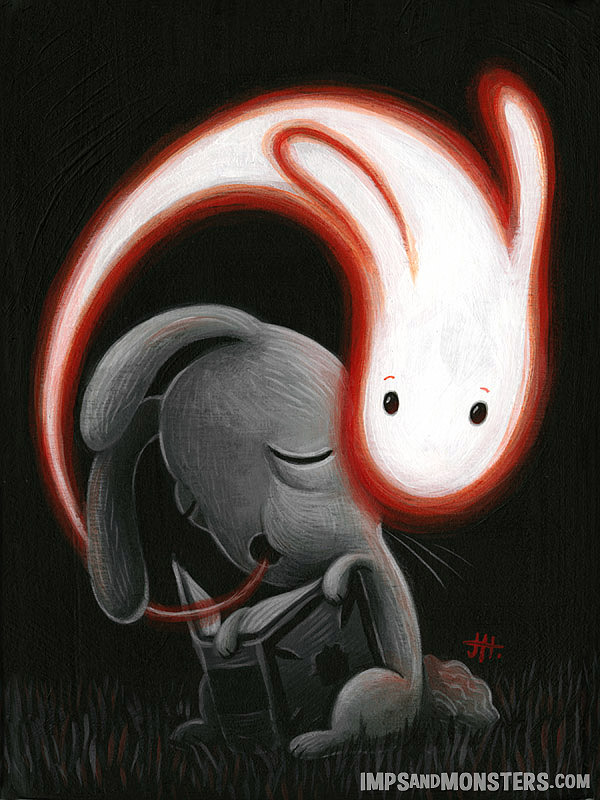 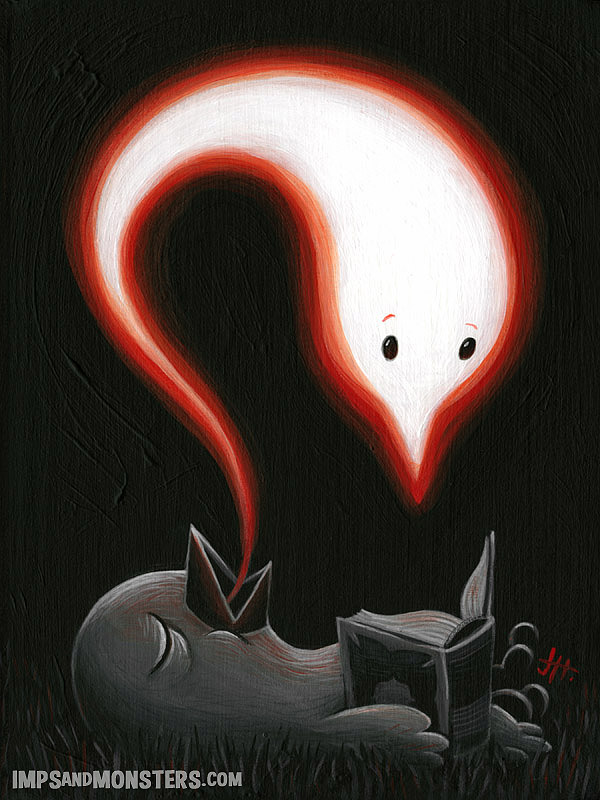 “How Does It End?
[A Limerick]

There once was a creature that read,
Books filled with adventure and dread.
Till along snuck up death,
And with one final breath;
“The End” had come early instead.

Many of the imps that infest the workrooms of most competent magic-users will pour through said wizard or witch’s shelves in their absence. They’ll read books, try on hats, fiddle with talismans and other objects of power, and otherwise attempt to emulate their hosts in the hopes of discovering new secrets to use, trade or sell. This can be quite dangerous when particularly adventurous or curious imps decide to sample potions and drafts they find at random. The luckier imps unstopper the sleeping potions before they get to the poisons. 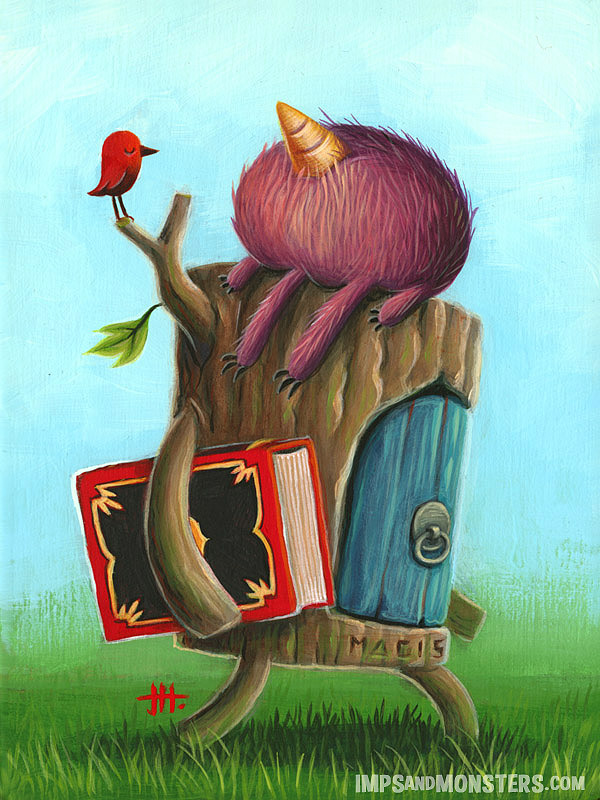 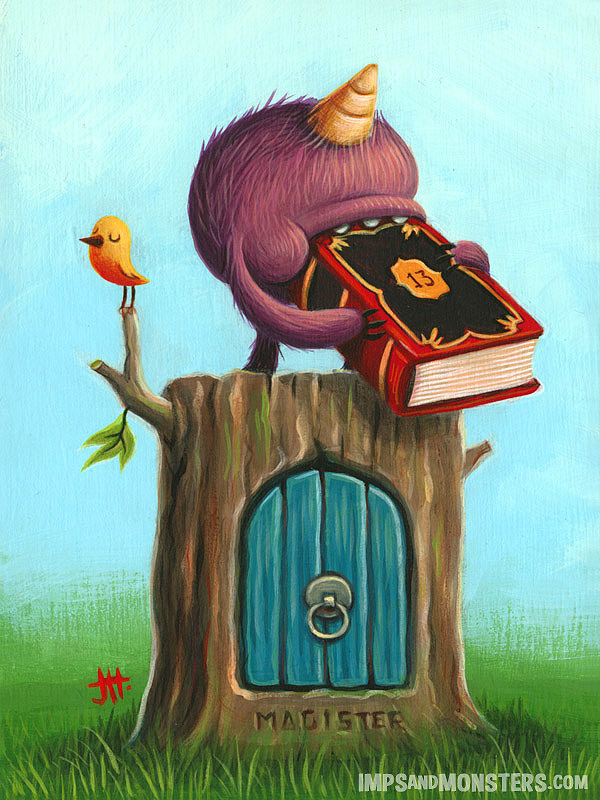 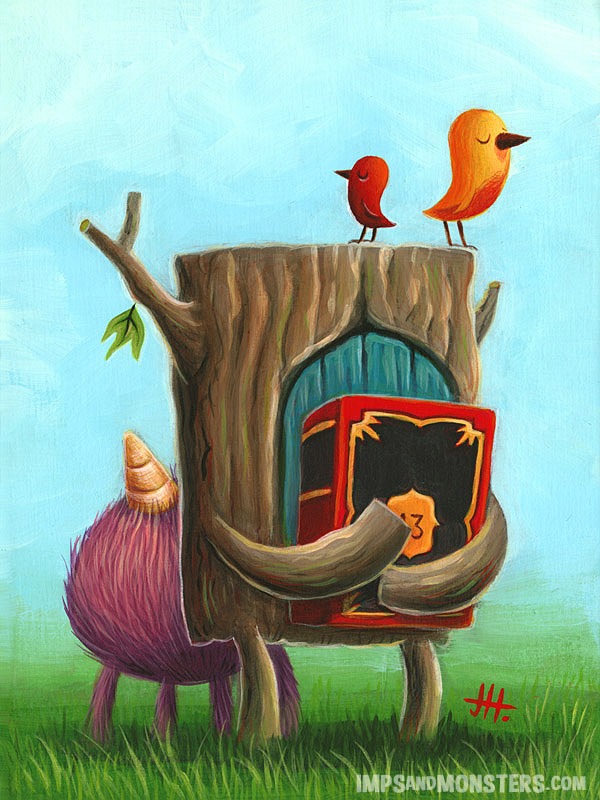 There is naught like a log and its book,
So happy a journey they took.
But his friend from the south,
Put the tome in his mouth;
So he pleaded ‘No tasting, just look.’ 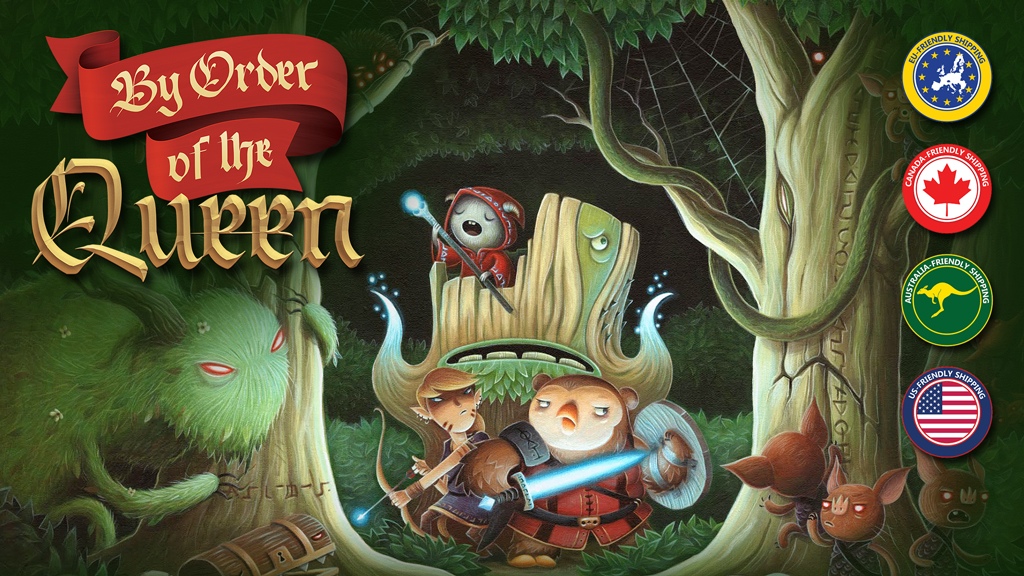 After a full year in the works, our  2-4 player cooperative fantasy board game is finally on Kickstarter! There is a reward level that includes my original inked drawings but those are limited so grab one quick if you are interested. You can find out more about the project by clicking the link below. And if you want to support the project but aren’t able to back it, please share via social media! 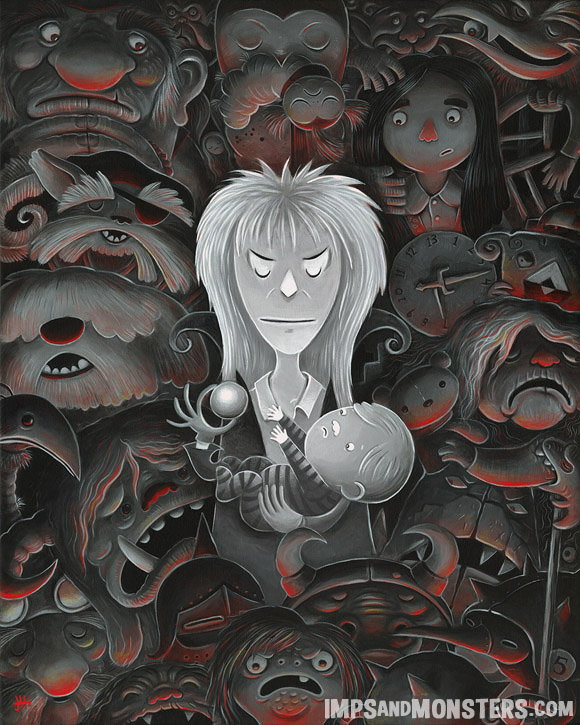 In preparation for a group gallery show celebrating all the celebrities that had passed recently, David Bowie came immediately to mind. “Labyrinth” is such an iconic movie from my youth and when I think of Bowie, I think of the Goblin King. I watched the movie four times while painting this, pausing here and there to get a good look at certain characters. 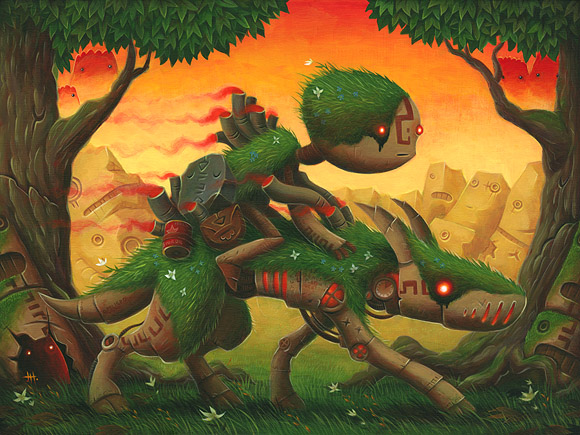 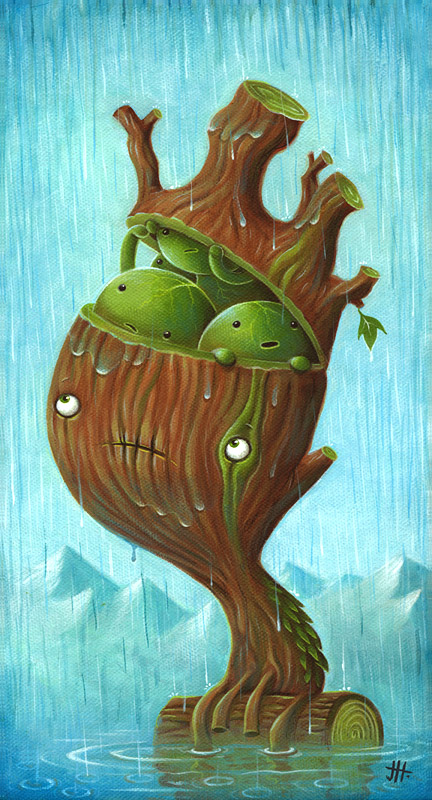 I found this painting half-finished sitting in my closet gathering dust. I cleaned it up and spent a couple days finishing it up. Had I finished painting it awhile back it would have been a very different painting – no rain and the little guys in its head were going to be white. Not sure I’d have added the leaves on its back either. Funny how things evolve… 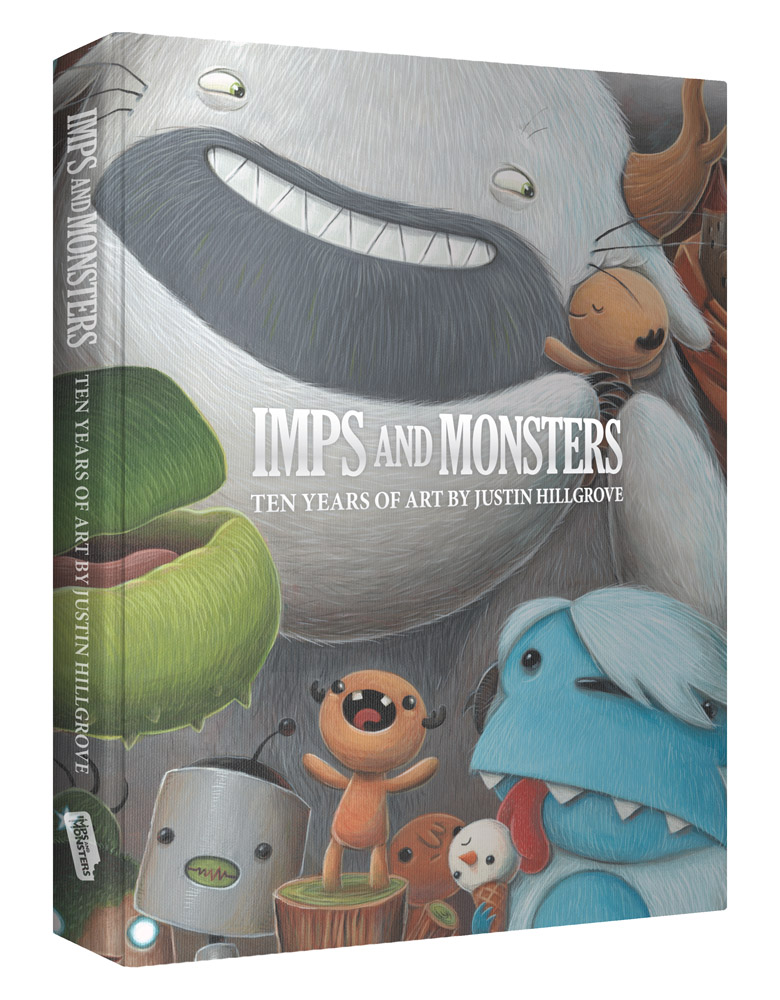